Tuesday and the next lot of books

Welcome to Pixiepoppet, Amber and Diana who are all new followers on Google Friends, and Laura following via Bloglovin'.
Thank you to Karen, Happening on Happiness, Dave in Ireland, The angry parsnip, Simple living, Jan, MendingMakingCrafting, Gill, my friend Mary in Bath and Diana who is overseas somewhere for all the comments about my books and bookshelves. Dave has suggested some more books by Tom Hodgkinson for me to add to my library request list. Gill suggests leaving a tin of polish and a duster laying around so that if anyone calls in it looks as if you were just about to start cleaning, that's a better idea than using candles so you can't see the dust.

The reason I have  the books tidy is so I know where to find each one and we always used to have them level with the front of the shelf when I worked in libraries. I do the same now to stop the layer of dust that would soon collect in front of the books. Having the books forward means the dust is behind them Out Of Sight!

Right, now the next photo is down on the proper bookshelves and under the Miss Read  we have 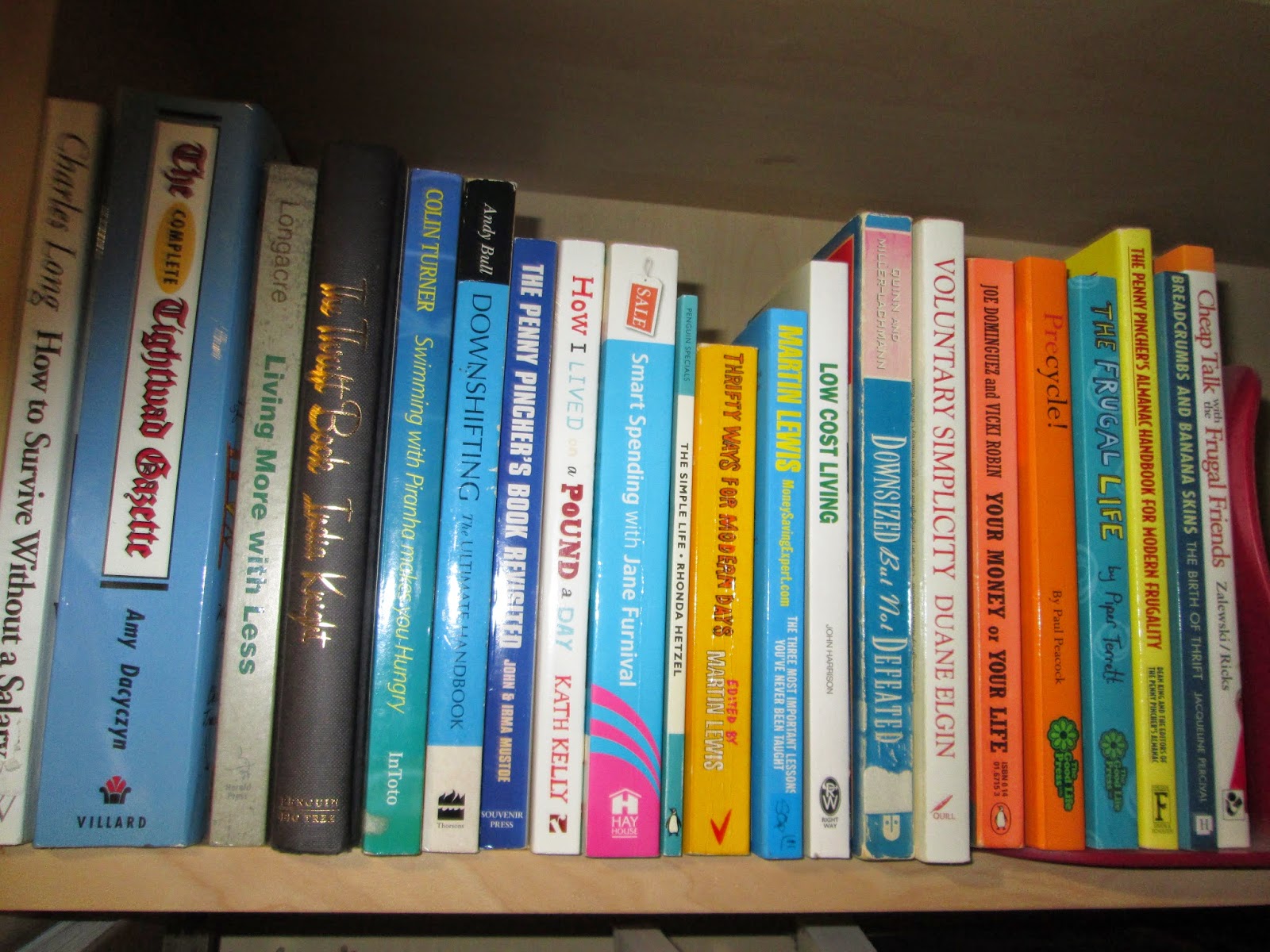 my books about money saving and penny pinching. ( Probably would have saved money by NOT buying them!) I think most of these have come from Amazon over the last 15 years, several are from the States. 'Swimming with Piranha makes you hungry' by Colin Turner is a book that really gets to the heart of the matter.

On the same shelf are my overflow cookery books. The rest are in the kitchen. 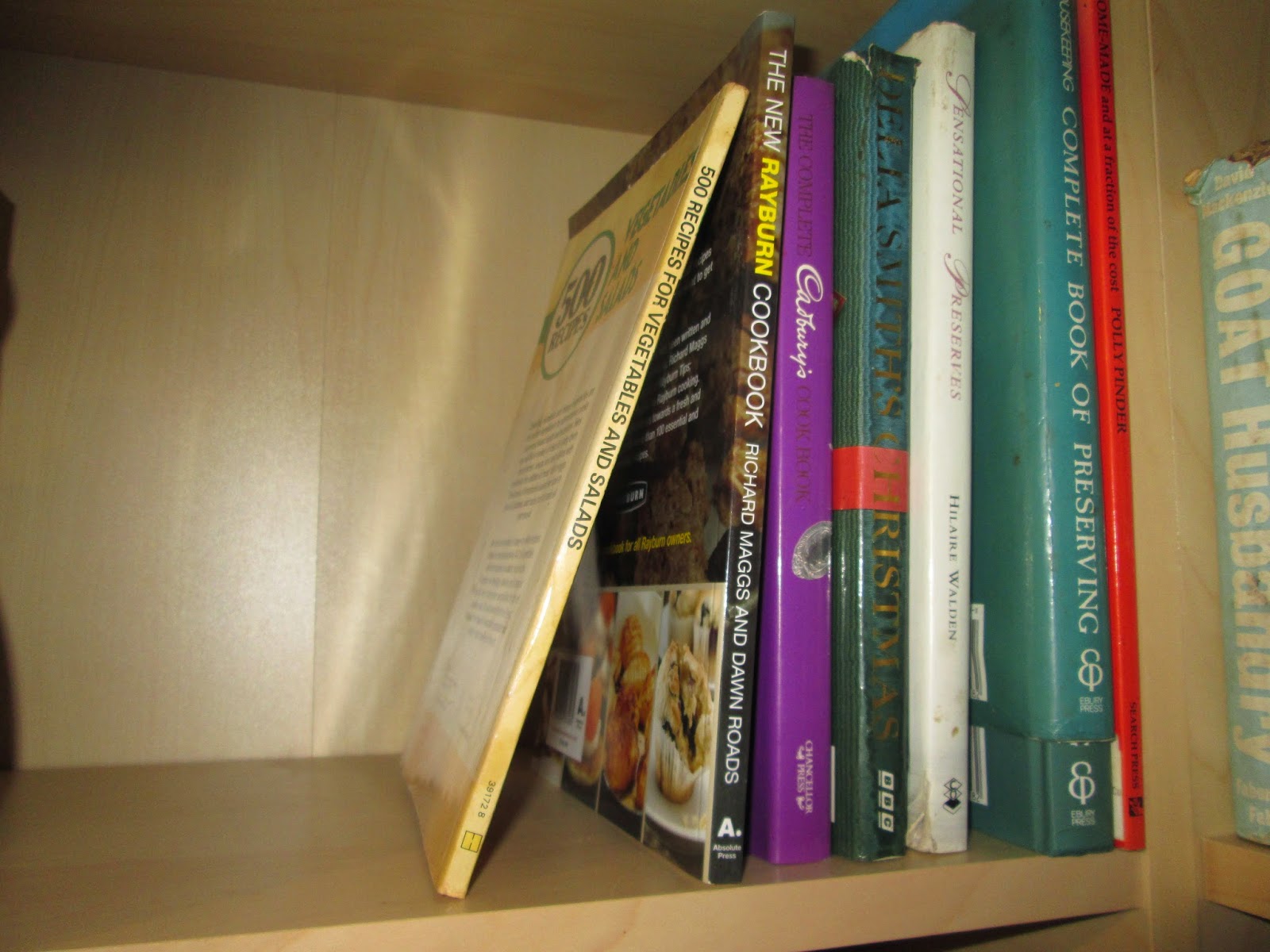 Below the money saving books are the first of my WWII collection, these are the most recent acquisitions, Amazon and charity shops again and some are presents from the last couple of years. 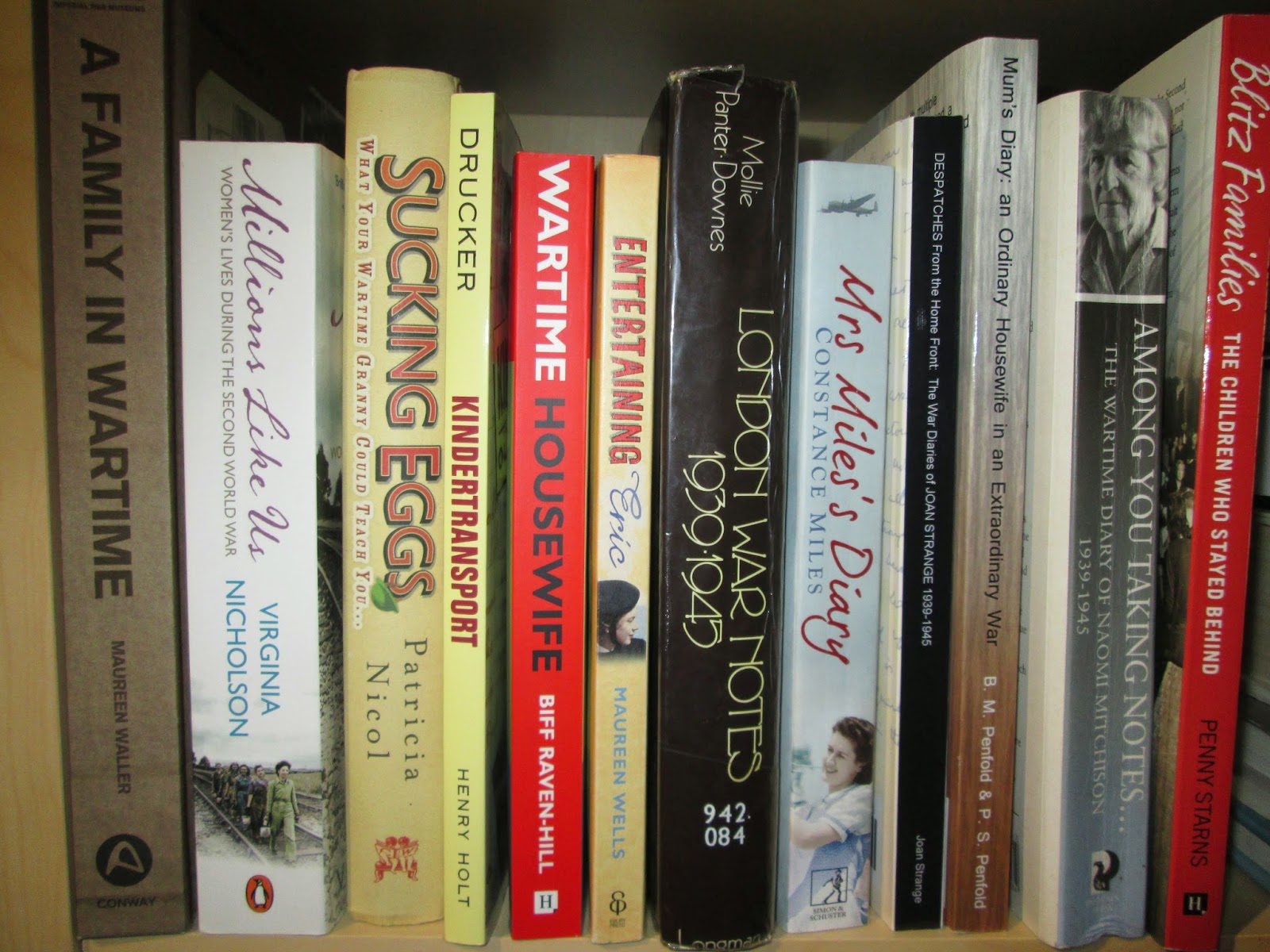 Then, laying down on the other half of that shelf are the Oxford Dictionaries and a few  other recently acquired large books. The dictionaries come from my late Dads house when we cleared it out. These are all sitting waiting for a more permanent shelf. Somewhere? 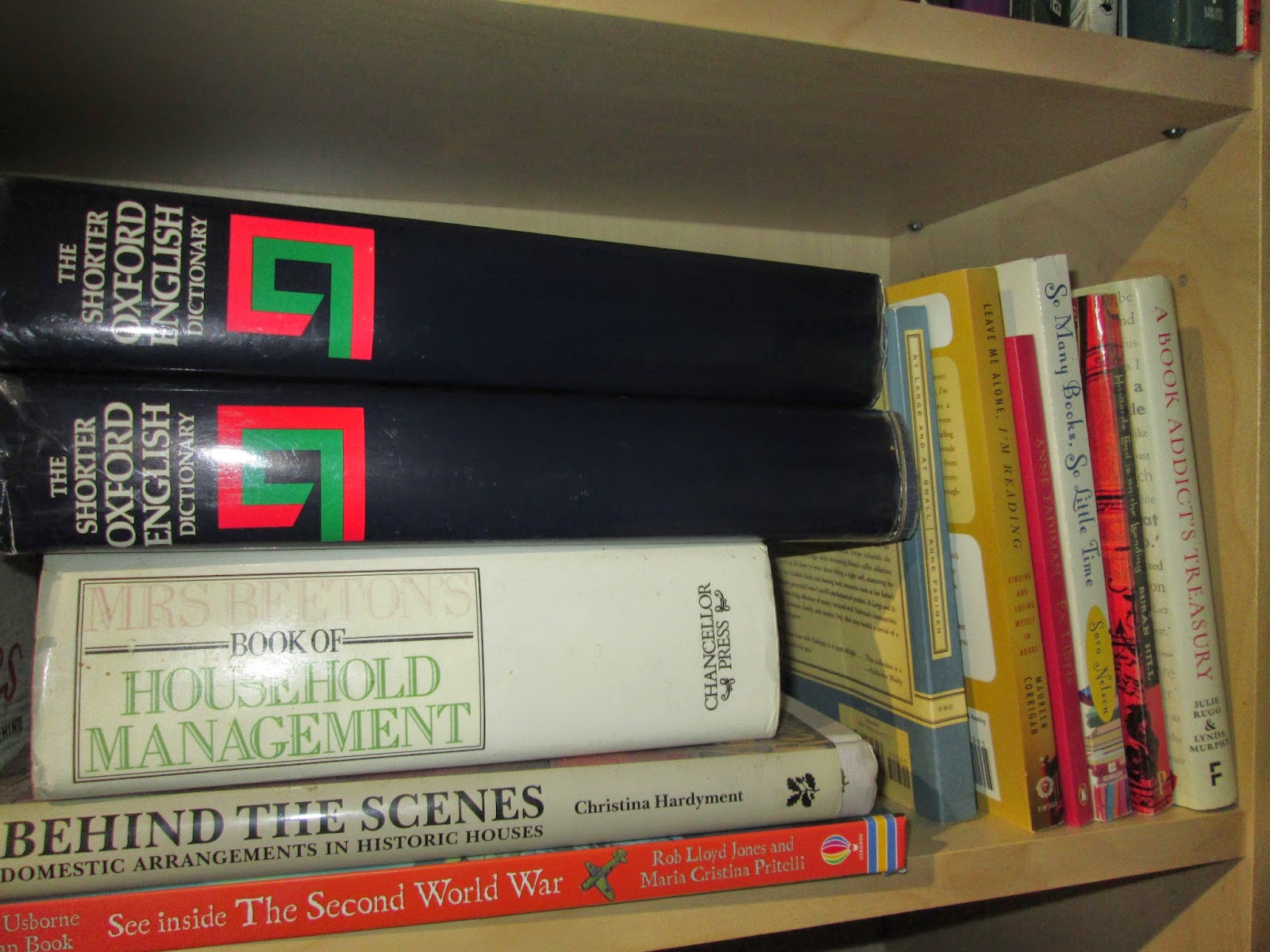 Standing up at the end are my books about books and reading. Two books by Anne Fadiman are brilliant - At Small and At Large and Ex Libris.
That's another 50 books ( running total 120)
Then below are the other two shelves of my WWII collection, which have been gathered, mostly secondhand, over the last 20 or so years. There are so many good books here it's hard to pick out favourites. 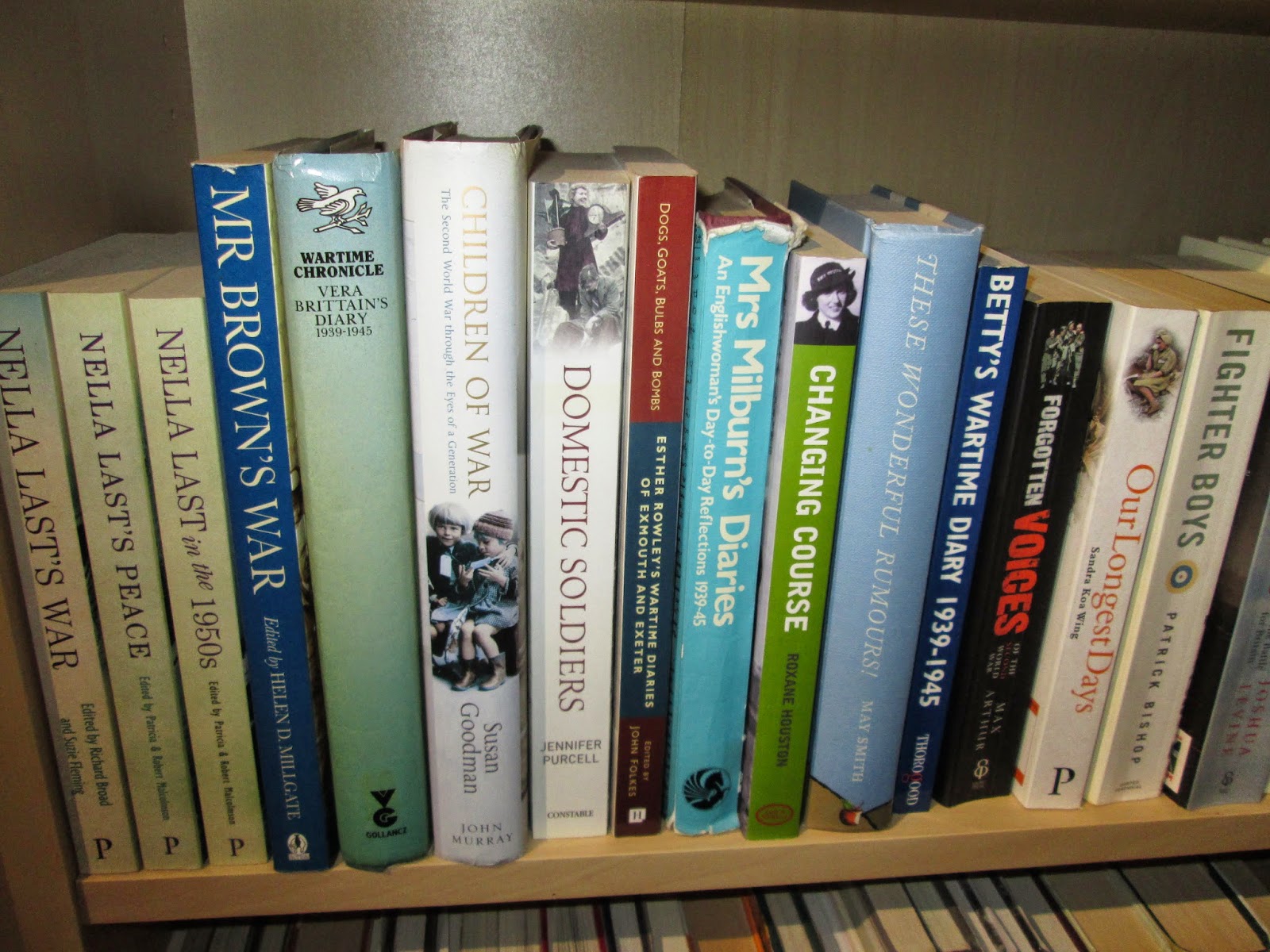 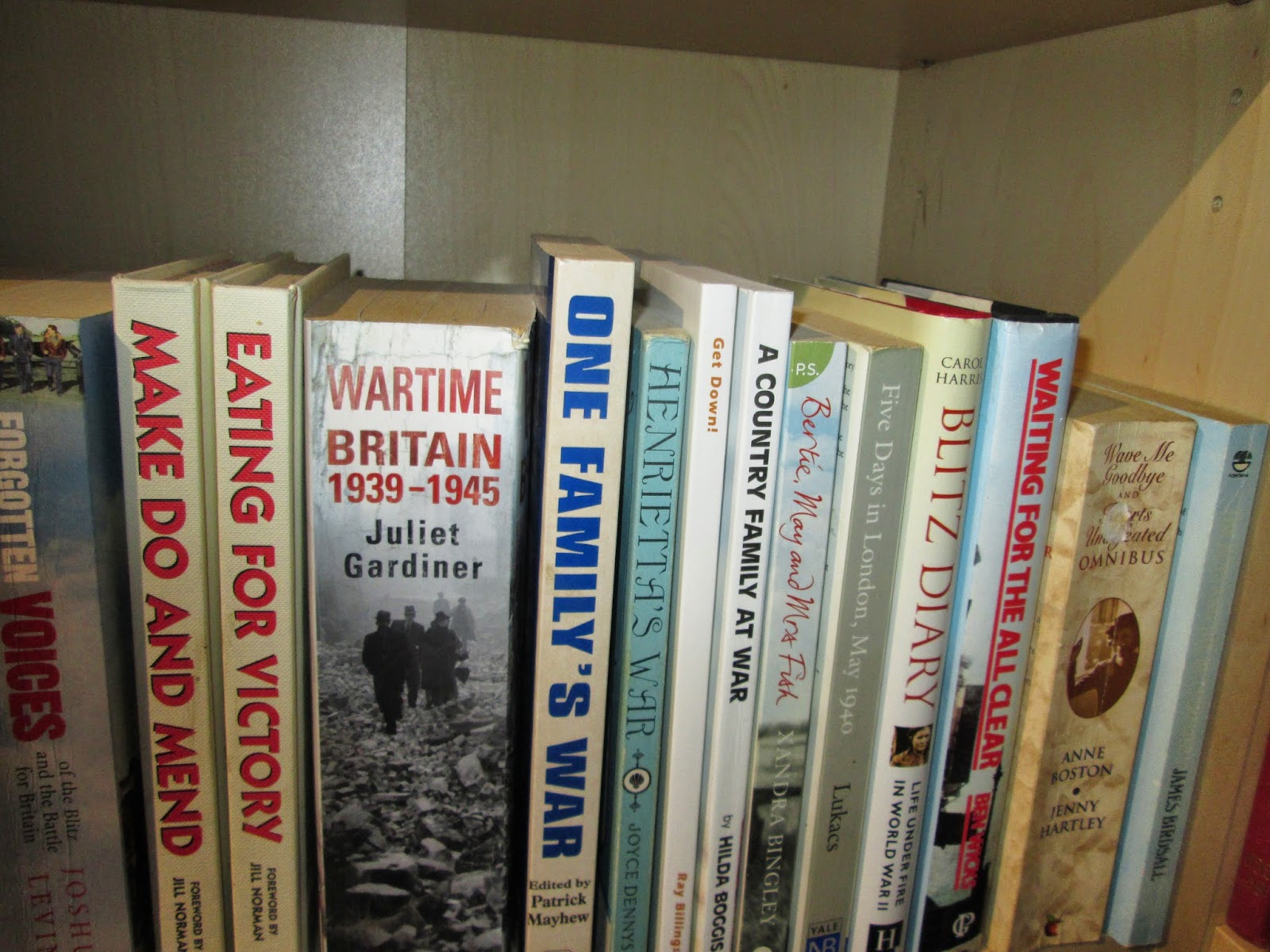 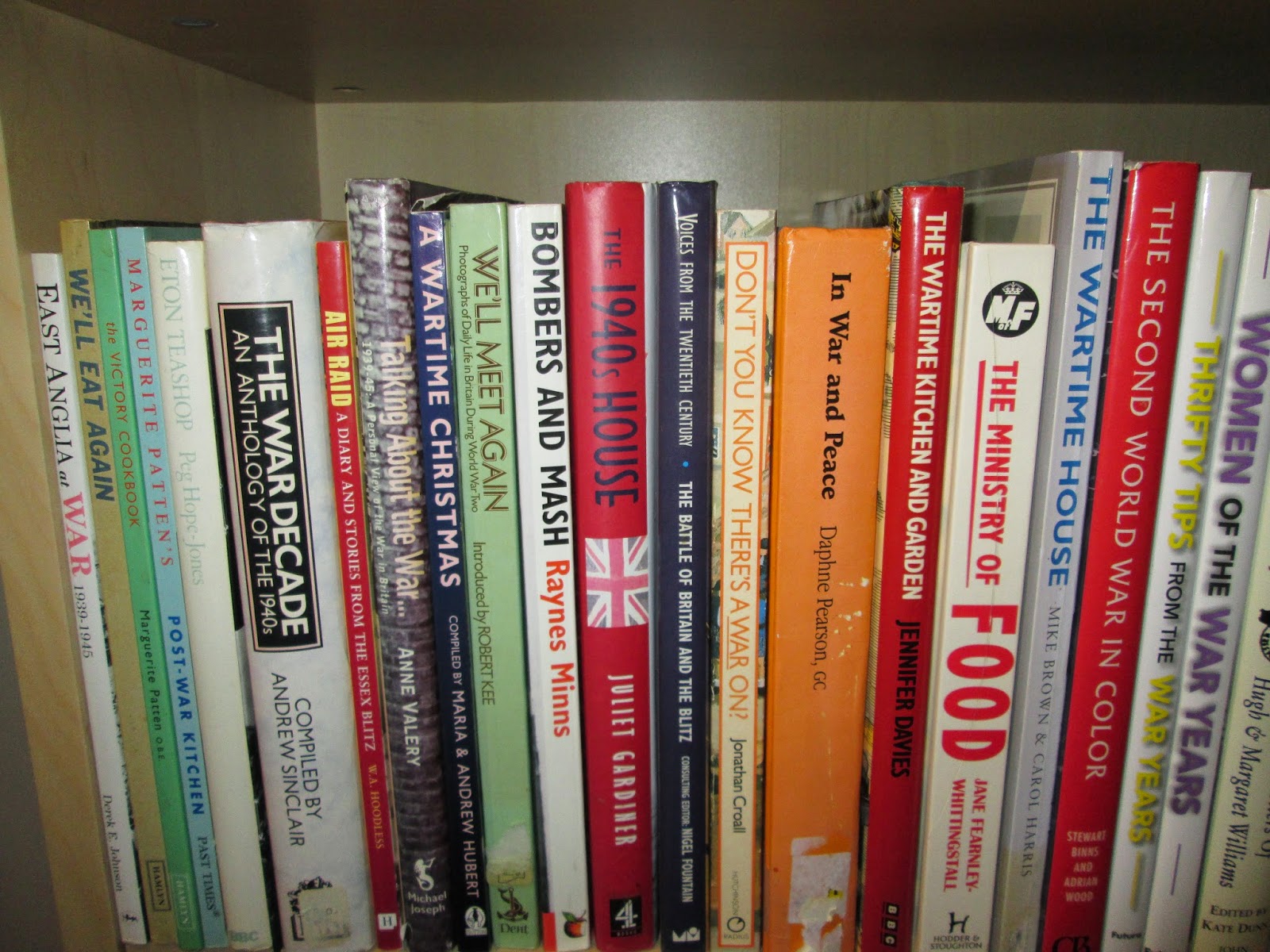 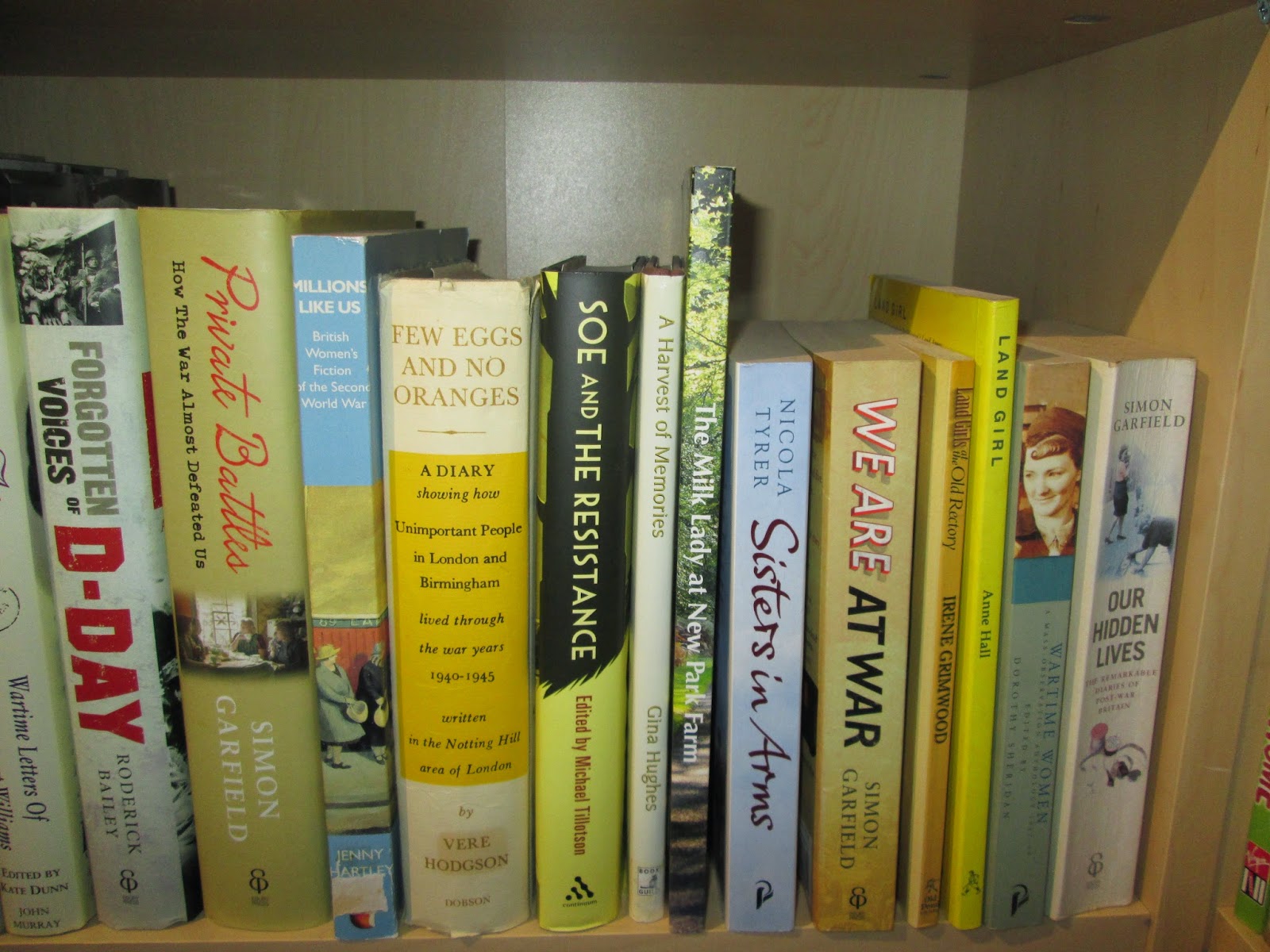 There are a few amongst these that have not been read, one day I shall get round to them. If I was forced to pick one as a favourite then probably 'Few Eggs and no Oranges' by Vere Hodgson is a really good read.
Add those up and that's another 64 so 184 so far, and I'm not even to the bottom of the first bookcase. Maybe we do have more than 1,000 after all.

A lovely bright Tuesday morning so two lots of washing were out drying on the line today as the forecast is for colder, nasty weather later in the week.  ( And Who left a tissue in a pocket?!! I blame him for not checking before he puts his clothes in the dirty washing bin, he blames me for not checking before I load the washing machine, Hmmm!) The day turned grey just after lunch and the washing was put to dry over the Rayburn.

Col was out for an hour doing some odd jobs for someone up the road and I was in the kitchen doing a bake of cakes for the freezer to keep him happy over the next few weeks. This afternoon he has been doing more of the conifer hedge. He has got round the  ban ( caused by the hardly-a-heart-attack) on using a hedge-cutter by borrowing a lightweight one that has a strap so it hangs over his shoulder like our strimmer. He says this is much easier to use than something that requires being held up in the air with both hands. I just hope he is right, I really do NOT need him stuck in hospital again. - Or worse!