A mini spree at Craft Creations

In the post this morning a £10 gift voucher from CRAFT CREATIONS and the return of my card that I had sent in for a competition ( didn't win a prize) but because it was featured on the Readers Gallery pages I get the voucher. Brilliant. 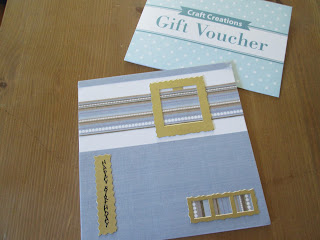 As you can see it is just a very simple card and that's the really good thing about Craft Creations they cater for people making very complicated paper crafted cards and for un-adventurous  people like me who just do basic stuff.
I shall use my voucher to get some of their new 3D decoupage sheets and creative papers of birds to use for card making for men - always the hardest to find ideas for. I haven't done any card making for months but will get going on cross stitch and paper crafted cards in the Autumn.

After a  weekend which was full of visitors and too much eating and lots of nattering we are back to normal today. My first job was to skin and then put 6lb of the huge Andine tomatoes into the freezer ready to make chutney or tomato sauces later. 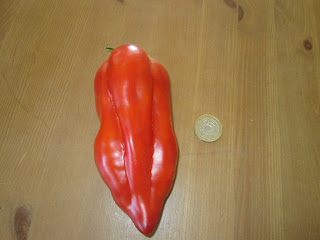 Next job was to start getting half of the hay shed for some new young pullets we will get at the end of the month. This involved using some shed sections ( which we didn't use for the new campsite shower as it has a concrete floor and a part perspex roof) to divide the empty bit off from the bit where hay is still stored. Some netting has been fixed to the top, just in case a fox decides to climb the bales and drop down into the chicken bit.In the corner of the shed was the remainder of a pile of old pallets that had been stored there ready for  cutting up before we built the other farm building and decided to use that for cutting wood. I suggested moving them to the new shed but Him Outside thought it would be easier to cut them where they were, so for the first time time since last winter out comes the electric chainsaw. Which, because it hasn't been used for 5 months, doesn't want to work. After taking apart, cleaning and putting back together again we are off. He does some cutting and I do the barrowing. It really is a sign of the changing seasons when we start adding to the wood heap ready for the Rayburn and the woodburner. So glad he is feeling well enough too!
The campsite is beginning to get busier as we head towards Bank Holiday weekend. It's been surprising how many people have rung in the last week wanting to come and when I've said " sorry we are already full ( 5 caravans) because it's Bank Holiday" they hadn't realised, as Bank Hol seems earlier than normal. We've also got bookings for the week after too which is good, sometimes things go very quiet then.
Easy meals today mainly featuring leftovers from yesterday.
at August 19, 2013