Welcome to two new followers - Meg and The Squirrel family.

It's been a smelly day here today as they have been spreading chicken muck on the field all around us. I've mentioned before that we have a big farming company farming all the fields near us after the man who used to farm them retired  last year. They have different ways of doing things and MUCH bigger machinery. I don't remember the other bloke doing muck spreading anywhere. I guess he just relied on chemicals.

I was picking tomatoes ready for putting out for sale this morning when I realised that if I didn't do green tomato chutney soon there wouldn't be any green tomatoes left to use. Green tomato chutney is so much easier than any chutney using red tomatoes as you don't have to remove the skins. So 5lb of green tomatoes have been chopped, along with a pound of onions and both have been put in a big bowl and sprinkled with a couple of tablespoons of salt. The bowl has been covered and then tomorrow I shall get on and finish it.

A while back I said we had a pointy pepper disaster as what should have been sweet peppers seemed to be really hot - more like giant chillies. Well, I tried the odd one off some of the plants and they were as sweet as they should be, so we were really confused. I didn't dare sell them as sweet red peppers in case they were hot and I couldn't sell them as hot peppers if they weren't. So there they have been sitting getting redder with me wondering what to do. Today I decided I had to sort things out and brought in  one ripe red pepper from each plant - one at a time, cut it, taste a tiny bit and if it was sweet I  would cut it into slices and pop them in a bag and put in the freezer and if they were hot chilli type I would at least be able to know which plants were which. I tried one pepper from the first 7 plants and they are all normal sweet delicious pointy red peppers.So now I have 4 large bags of sliced pepper in the freezer and I'm nearly as confused as I was before. I still have to try one pepper from the last 5 plants - will one of them be really hot or are we going mad? Were they hot early on and have now turned sweet?  Another mystery.

Talking about mysteries. Do you remember The Mystery of The Missing Postbox, the one at the end of our road which " got demolished". Well, according to a bit in the freebie paper I picked up the other day we are not the only ones to lose our postbox. Two more have been stolen from other villages around us. What a weird world we live in! Our MP has been roped in to try to get the one that was nicked in the village of Blaxhall replaced. So I might have to contact her and see what she can do for us.

And finally here it is - this months heap of borrowed books collected from the library van today. 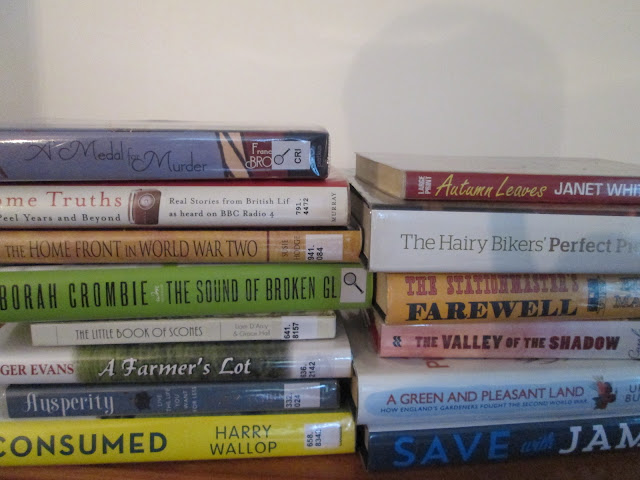 I'm a bit puzzled as I've had some of them before, so not sure why they got themselves re-ordered and have turned up again. The mobile library only stops for 15 minutes in Friston so there is not a lot of time to sort out any problems and it isn't long enough for the driver to get the satellite dish up and running  to check the computer for any queries. So I just brought the whole lot home. Most of these I had pre-ordered via t'internet and a few came from the library van shelves. I also collected a bag full almost as big as this for Him Outside. Good job the wind blew my bike up the hill on the way home!

After all the discussion about Jamie Olivers' programmes on "cheap" cooking I thought I ought to borrow the book and see what all the fuss is about as I have no intention of watching it.
Very few fiction there to read so I may have to resort to my bookshelves here  which shouldn't be a problem.
What would this lot cost if I had bought them? about £220!! Thank goodness for the library van and the free ordering system we have here in Suffolk. Borrowing books from the library is one of our best ways of being frugal.