The last day of summer?

No holiday for us this year and not many days out so when the weatherman said it would be all change on Friday we decided to make the most of what might be the last hot day and have a few hours on a beach.(Despite living 4 miles from the sea we rarely sit on a beach) 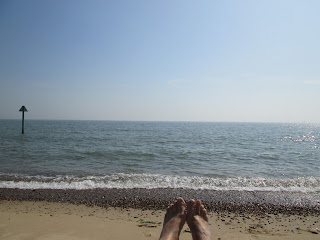 Instead of just popping down the road to the shingle beach at Aldeburgh I decided I wanted to see some sand for a change so suggested a trip out to Felixstowe - a place I spent a lot of time at in my teens, but somewhere we don't go to very often now.This also meant we could come home via Sainsburys in Ipswich and pick up some value bacon bits. So we packed  lunch in the cold box and our chairs ( and my book of course) and off we headed.
Lovely sunshine, a nice little breeze and it was a treat just to sit for a while and listen to the waves swishing.

A good look around Sainsburys resulted in some yellow sticker pork chops and pork slices and several of their value range including pepperoni for pizzas, salmon bits to have in a sauce with pasta and of course the bacon. We may not be at that end of Ipswich again for months so I got 4 packs of bacon which after opening and sorting gave me 7 bags of bacon rashers and bits - 1/2 lb in a bag and 6 bacon chops. Then Him Outside found engine oil with a huge discount of  4L for £4.79.

It was all go when we got home as 1 caravan( pre booked regular visitor) had arrived, another small motorhome turned up without a booking and another motorhome who had been here yesterday had come back for another night. Then there was a message on the phone for another visitor for Saturday.
Washing to get in, eggs to collect and sort, campsite toilets to check and clean, dustbins to empty, and of course the bacon and other stuff  to sort out and put away.