On a Sunday Soapbox

I was browsing in blogland last night while watching that programme " Should British people without talent be on TV" when I came across a blog where somebody was saying how they didn't want to join in the £30 for 30 tips thing because the things they did were not what other people did and they didn't want to be seen following the crowd and "making up" tips just to get the money. ( I couldn't find the blog again and not sure where it was)
Surely the whole point of Frugal Living is that everyone is different, everyone has different reasons to live the way they do and different ways to do it. Probably one persons frugal tip is another persons extravagance and vice-versa. But that doesn't matter, it is up to individual choice.
Our reasons for being frugal are over on the sidebar and so is the way we do things. We've often been told we are lucky for owning a smallholding but we are old and started way back when houses were cheaper and we were able to buy cheap, do them up and sell a few years later. We did this 5 times including living in a caravan for a year with 2 children under 5 and working late every night on a house that had been declared uninhabitable by the council. But we made choices to do that, like buying childrens clothes at jumble sales and not Mothercare as was the norm at the time. Later when the children were older we choose not to holiday abroad, even though they said all their friends were, and camped in this country instead. We choose not to have new or even newish cars and we were lucky because Him Outside can turn his hand to most practical things. Yes, we were lucky as we didn't have debts and a big mortgage and we were able to pay it off early but we choose not to buy things that we couldn't afford. Our first new sofa was bought only a few years ago and we've been married for 34 years! but that was our choice. Yes, we were "lucky" that my Dad died a few years back and left us some money to build a kitchen extension and to modernize the house to make it more fuel efficient so it was cheaper to live here, but we choose to do that rather than go on a cruise or whatever. We are so lucky to have a choice and I know some people will say they have no choice to do what they do and I'm sure that's true and that's the sad thing about the world. But we can only do what we do and as far as I know  we don't upset anyone doing it. So I shall carry on being frugal in our own way and enjoying it. 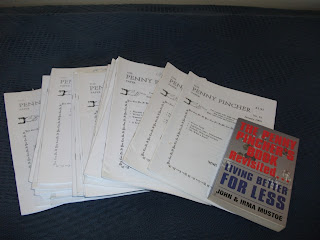 On a much lighter note I had a reply to a blog last week mentioning The Penny Pincher Paper and I was so excited to find someone else who had heard of it. ( Apart from my 6 PPP friends - Hello Sandra, Alison, Mary,Janet,Jill and Gill !) It was a small privately published newsletter that ran for  around 5 years. Produced by John and Irma Mustoe who appeared in the VERY early series of Scrimpers in around 1992 or 3. They then did a book and followed that with The Penny Pincher Paper. I have no idea how many people subscribed to it, but as lot's of different people contributed their own ideas on living better on less, it must have been several dozen at least. So is there anyone else who subscribed out there? The Mustoes  were frugal because they loved travelling, so they choose to live simply in other ways to afford their world travels. Everyone is different. Which is  a good thing as it would be a pretty boring world if we were all the same.

Sue in Suffolk
I'm creeping towards 70 and proud of being Suffolk born and bred! After 38 years of happy marriage .....with 23 of those years spent on a self-sufficient smallholding....my dear husband Colin was diagnosed with Mantle Cell Non-Hodgkin Lymphoma and died in May 2018. Our 3 grown up children have given me 5 wonderful grandchildren. In 2021 I moved 3 miles from a cottage at the end of a lane to live on the edge of a village in Mid Suffolk. .